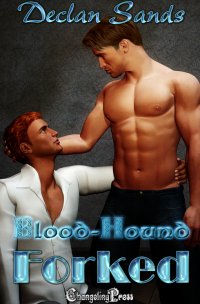 Today's Sunday Snippet is from FORKED, Book 2 in the Blood-Hound series!

Cliff Blood doesn't like giant snakes, but a sexy Marshal with fire in his eyes is another story!

Cliff started to climb out but the marshal reached over, wrapped his long, warm fingers around Cliff’s wrist, and held him, staring into his eyes. “You know where this is going, right?”

A smart-ass retort danced on the tip of Cliff’s tongue, but something about the way the other man was staring at him smacked it down. Marshal Scott looked at Cliff like he’d been living on rice for months and Cliff was a juicy steak. So Cliff decided on brutal honesty. “It’s going nowhere. You and I are on opposite sides of this thing, and it’s going to stay that way.”

Scott cocked his head. “I disagree. Scott leaned toward Cliff, his fingers tightening on Cliff’s wrist as he drew him closer. The marshal stopped a fraction of an inch away from Cliff, his warm breath tickling across Cliff’s face, and his tongue came out to give a slow, sensual slide across Cliff’s lips.

Cliff’s skin tingled. His palms itched. And his heart was pounding so hard against the inside of his chest he thought he might pass out. Then those exquisite lips lowered, and his mind shut down. The world narrowed to nothing but the feel of those lips against his, the touch of Falen’s fingers on the sensitive skin along the inside of his arm, and the incredible scent of the man who suddenly seemed to entirely fill the inside of the small car. The marshal’s presence was so big there suddenly wasn’t enough room for Cliff. He felt as if all the airbags had deployed and left him squashed into the corner.

Except these air bags felt like heaven and smelled even better.