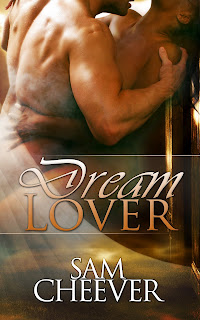 Dream Lover - Have you Ever Wished for a Sexy Genie of Your Own?

Soft lips slid over her shoulder and trailed down to her breast. A hot tongue licked the rounded top of one quivering mound and traveled across to the other one, pulling a hard nipple into soft heat. Esme gasped in sheer pleasure, arching into a long, hard body. Soft strands of hair fell across her face and the heated caress of lips feathered over her chin, her cheeks, her eyes. Esme plunged her fingers into the silk of long, straight strands and pulled the exquisitely soft mouth to hers.

His breath was gentle on her lips, the musk in it bringing a flush of pure lust to her skin. Esme’s tongue came out to slip across the slightly parted lips, causing him to groan with pleasure.

Filled with ravenous need, she lifted her legs, opening them wide in unmistakable invitation. Her lover sighed as he slid into her. His lips fell on hers, all signs of gentle persuasion gone as the heat of their joining spurred them to the next frantic level of lust. His body started to move against hers, slowly at first, and then increasing rapidly in tempo and intensity. Gooseflesh sprang from her skin and she began to shake uncontrollably against the tide of lust building within her.

He groaned her name against her lips and Esme sighed. She felt as if she’d waited her whole life for his touch, the sound of his passion drenched voice, the drift of his heated breath against her skin. She threw her head back as his body teased her closer to that elusive peak, playing against her erogenous zones with the practiced skill of a maestro in front of the world’s finest orchestra.

Her body climbed toward a maelstrom of incredible sensations and she reached to pull him closer, her hands wrapping around hard, round buttocks to bury him as deeply as possible inside her body. He groaned and increased his tempo.

Esme’s breath locked in her chest, her head fell backward on a gasp, and her body surged toward his before tightening in spine bending release. His head lifted and he cried out, screaming her name into the darkened room. Esme felt him pulse inside her, pulling her into another powerful orgasm as he plunged deep and fast into his own release.

As they softened downward in gentle pleasure, his lips found her face again and worshiped there, trailing across her lips, her cheeks, and her eyes. He placed a gentle kiss on each quivering eyelid and sighed. “I’ve waited so long for you, Esme. It is time we are together at last.”

His words drifted away on a sigh and Esme suddenly realized she’d lost his warmth, his gentle touch against her fevered skin...

Book information and more...
Posted by Sam Cheever at 3:04 PM

What a fantastic Snippet :o)
Really enjoyed reading this piece.

Thanks so much! I'm really glad you enjoyed it. Nothing like a sexy genie to kick start your day, eh? hehehe