It's true, I used to have a blog here. #:0) But I've combined my blog with my website so visitors can enjoy one stop shopping! If you'd like to see what's on my mind or get information about WIPs, new releases, and contests, you can visit my new blog, entitled Eclectic Insights, here!

Thanks for stopping by!
Posted by Sam Cheever at 7:40 AM No comments: 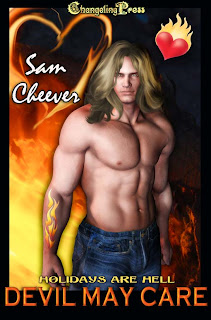 When your name is Valentine, February’s pretty much gonna suck.

Valentine Smith H-A-T-E-S the month of February. The constant jokes about her name and comparisons to the chubby guy with arrows are enough to make her want to run and hide for the entire month.

But, this Valentine's Day, the ultimate joke is about to be played on poor Valentine. She's supposed to choke on a chocolate heart and die. You'd think that would be bad enough. But when she misses her chance to die, she finds herself running from an overly ambitious angel and a sexier-than-hell devil named Abbadon. In the race between good and evil it's no contest. Hell has sexy green eyes, lots of yummy muscles, and a truly decadent pair of lips to ease her pain!

Don lay listening to Valentine’s soft humph, humph sounds as she slept. He leaned against the headboard, smiling as she snored. His heart was fuller than it had ever been. He felt like he’d waited several lifetimes for the woman sleeping beside him. But at the same time his heart was breaking. She was so full of energy. So vibrant. So wonderfully alive. Yet he would have to take that away from her. Would she be different in her soul form? Would she lose her appeal?

Don’s immediate reaction to those questions was denial. Looking at her lying boneless, rosy-cheeked, and seemingly content beside him, he doubted she would ever lose her appeal for him. But sometimes souls didn’t take death well. Sometimes it turned them sour. His world would end if he was the cause of Valentine Smith turning sour.

Whatever she’d done with her life, she was a bright light in the human world. A light whose loss would dim existence for those remaining behind. He frowned. He didn’t think he could do it.

Valentine wrinkled her nose, tossing her head in her sleep. Don reached over and collected the silky strand of hair that was tickling her nose, his frown turning to a smile.

He suddenly knew he couldn’t kill her. He knew it with the certainty of having lived for hundreds of years. He was a cynic -- a selfish, thoughtless man -- but he also knew a fire had started in his belly over the beautiful woman lying next to him, and that fire had inflamed his heart for the first time in his long, long existence.