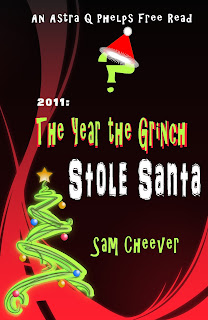 Astra still smells like Reindeer poop, even though she insists she’s showered several times trying to get rid of the stench. So nobody wanted to stand next to her at the party. Plus she was pouting because the sexy Dialle was too busy prepping for the upcoming Dark Council meeting to attend the party (The Devil You Want).
On the plus side, I got to spend some time with my new characters, Rissa and Jurden (Riding the Pulse). They were a pleasant couple, though Jurden kept holding up a vibrating finger and dancing his eyebrows at Rissa. At one point I caught them in the guest room under a pile of coats. The coats were vibrating and a buzzing noise filled the room. I threatened to throw water on them and short circuit their pulse if they didn’t turn the rating back down to 'G' and rejoin the party.
I mean, there were young adults in the house.
Speaking of Rosalee Tatiana (Queen of Environmental Club), she brought her dog, Mr. Elliott to the party. What a cute little doxie! He and Wally had fun chasing the barn cats around the hay bales all night. Rosalee is currently fighting off pressure to become the next Queen of the Fairy mound so she was a little twitchy all night, moody as only a seventeen year old can be. Thank heavens her partner in fairy crime fighting, Teague, was there. His ignorance of all things Earthly was a great source of entertainment for the love demons (Cupid only Rings Twice). They kept dialing 1-800-hotdate and handing him the phone. I’ve never seen a fairy turn that particular shade of purple before. Poor thing.
But I confiscated the phone from the demons and hid it in the guest room (that’s how I discovered Rissa and Jurden Riding the Pulse amongst the coats!)
Nuria and Ian Lavelle stopped in for a few minutes (Guardian) but they weren’t there long. The Elves had heard about her weakness for ambrosia and they thought it would be funny to spike her punch with the stuff.


Shudder.
Ian ended up carrying her out of the house over his shoulder. She was yelling “ver purty!” over and over again and squeezing his buns as she hung down his back.
And speaking of buns…what party would be complete without its share of hot, hunky Honeybuns? All the brothers were there. Godric brought his new Honey, Dini to the party. She fits in well with the Honeybuns and the other Honeys. Godric showed everybody his scars from his reenactment weekend in a Southern Indiana woods (Honeybun in a Loin Cloth), and Dini used her special, magical cream to soothe the burns on one guest who’d gotten too close to the dragon games in the front yard.
Amazing stuff. She should patent it. #:0)
This year I got smart and set the dragons, gargoyles, and harpies up on the lawn, surrounded by guardian angels so they wouldn’t eat my neighbors (or their pets). The horses were hiding in the barn, under angelic guard as well. Other than one incident with the dragons burning crop circles in the hay fields around the house (you can’t imagine how much fun it was trying to explain to my neighbors that we weren’t being invaded by aliens…sigh) the party outside the house was fairly orderly…though loud. Once, when Glynus initiated a hearty rendition of “Oh Come All Ye Faithful” several car alarms in the neighborhood went off and the police were called. I just barely managed to keep them from becoming harpie kibble and sent them on their merry way with the promise that the dragons would stop singing.
Talk about a Bah Humbug.
Overall the party was a success, though everybody carried their own concerns into the fray, the season managed to work its enchantment on all of us. Being together, sharing love and…other emotions…and basking in the beauty of the season, I think we all gained a little from being together to celebrate the year’s most magical season.
Except for my poor husband…who had the job of scooping poop out of the front yard the next day. I think he bent the shovel on his tractor with the last load of dragon poop. As soon as we get some snow we’ve planned a skiing vacation on the mountain of poop he created in the woods behind the house.
What can I tell you…he’s the man behind the woman who creates more problems in her stories than she solves.
It’s how I roll. LOL
Merry Christmas, Everybody!
Posted by Sam Cheever at 8:04 AM

I just saw your character party on the RRP loop or I'd been here sooner! Have a great Holiday!

I would have been here sooner, but just saw this on the RRP group.
This is so creative and inventive!

Have a wonderful holiday.

Thanks so much for stopping by!

I hope you had a GREAT Christmas and have a happy New Year!