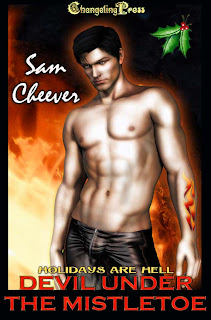 I got tagged by Zenobia Renquist to do a blog hop post for The Next Big Thing. So this week, instead of a Sunday Snippet, I'm participating in the blog hop. I'll do a snippet of the new book next Sunday!

1. What is the title of your latest book?

2. Where did the idea come from for the book?

Anybody who has survived a Christmas or Thanksgiving get together with family knows that Holidays are Hell. LOL So, when I was looking for an idea for a Christmas story, of course I thought of devils and other inhabitants of Hell. Who wouldn't  And, since more people seem to die around the holidays, I came up with the idea of the Perdition Guides. Think of these sexy devils as escorts for Hell. Trust me, once the ladies start reading about these guides, they’ll be fighting to go South when they die rather than reaching for the clouds!

3. What genre does your book fall under?

4. Which actors would you choose to play your characters in a movie rendition?

Christian Bale would be perfect to play the part of Damian and I’d love to have Molly Quinn from Castle play Amanda.

5. What is the book blurb for your book?

Perdition guide Damian is supposed to escort sexy Amanda to Hell. But he’d much rather keep her.

Damian Noire is a Perdition Guide. He escorts people who die to their rightful spot in Hell. Business always seems to pick up around the Holidays and this Christmas is no exception. Damian’s assignment is to bring a beautiful young woman to Hell to stand before the judgment assembly, and then take her to her assigned circle of Hell. It sounds simple. But it’s about to become the hardest assignment he’s ever performed.
Amanda Wright might have been unjustly judged. She might not belong in Hell at all. Problem is, Damian really kind of likes her. He especially likes enjoying her lush, willing body under the mistletoe. If he gets her the judgment she truly deserves, he’s probably going to lose her forever. But if he doesn't help her, an innocent may spend eternity in Hell. It appears to be a lose/lose situation on all fronts. Proving once again that holidays truly are hell!

6. How long did it take you to write the first draft of your manuscript?

It takes me two to four weeks to write a story of this length, depending on what else I have going on at the time. #:0)

7. What other books would you compare this story to within your genre?

It’s hard to compare this to another story because I've never read one with this premise. I’m sure there’s something out there, but I haven’t read it. If anybody knows of one leave me a comment and let me know the author/title. I'll go check it out!

8. Who or What inspired you to write this book?

I really wanted to come up with a series wrapped around holidays. Once I came up with the series premise the story line for the first book came pretty easily.

9. What else about your book might pique the reader’s interest?

The world I created in Hell is really interesting. It consists of several layers, based on how terrible your crimes are. Hell has three suns (that’s why it’s so hot) and a boiling sea with black sand. Fortunately the boiling sea is really just the comfortably warm sea…think hot tub. And there are portals all over for really quick travel through Hell. But most importantly, if you end up going to Hell, you’re gonna get escorted there by a really sexy devil. That’s not all bad right? However, if your crimes are bad you’re not gonna like where you end up. Just sayin’!

Now I’m supposed to send you to 5 more authors to carry on The Next Big Thing. (Rubbing hands together gleefully) Okay, my victims…er…selections are: