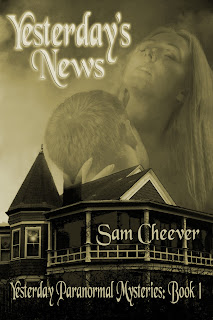 Antiques can be a dangerous business. Especially when you’re dealing with a desperate politician, a sexy ex-cop, and a couple of “spirited” companions.

Anna Yesterday owns Yesterday’s Antiques in small town USA. When she finds an old newspaper clipping lining the drawer of an antique dresser, she realizes she’s never heard the horrible story of rape and suicide detailed on the yellowed newsprint. So she starts to dig, and her sleuthing exposes an ugly cover-up that casts the residents of Crocker, Indiana into danger and intrigue, and leaves them with a corpse.

Rain beat a constant staccato on the windows of the store, occasionally driven into the glass by a burst of harsh wind. Anna sat on her stool behind the counter, leaning on her elbows and watching it come down. Rain always made her contemplative.

“A penny for your thoughts?”

She jumped and turned to Joss, frowning.

“I didn’t sneak, Missy. Your mind was up in them clouds.”

Anna sighed. He was right. “I was just thinking.” Actually, she’d been wondering about that story again. It had depressed her, thinking that the Bethesda family might have something as ugly as rape in its proverbial closet. Especially since Mason Bethesda had aspirations for higher political office.

If it was true and his father had never paid the price for the act, that would be a terrible thing for Mason’s campaign. It was bad enough, in fact, that Anna was pretty sure Mason would do just about anything to keep it out of the news. His earlier behavior would seem to support her fear that he wasn’t going to take kindly to her trying to uncover the truth.

“Hello? You back in them clouds?”

“I’m sorry, Joss. I was just thinking about that newspaper article. I haven’t been able to find anyone who heard about the rape of this poor girl and the microfiche at the library didn’t have anything on it at all.”

He dropped his delectable butt onto the counter next to her and frowned. “Now that is a conundrum. Reckon it could be one of them false papers that show what happened on your birthday and such?”

“Not likely. Those papers are fake, but the news on them is always real. No. This is real newsprint. And the edges are singed, like somebody pulled it out of a fire.”

Joss thought about this for a minute. Finally he said, “Maybe Bess recollects somethin’ about it.”

Anna had forgotten about Bess. She liked to do that whenever possible. “You’re right. I’ll ask her. Thanks, Joss.”

He reached out and pushed an errant curl behind her ear. Where he touched her she felt tiny sparks but no heat and no skin. It always made her sad that she couldn’t feel Joss. She figured touching Joss and having him touch her would be a life-changing experience.