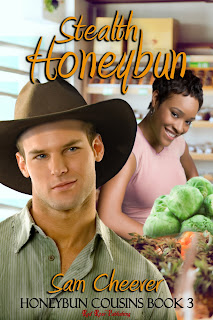 Peyton Honeybun just wants to get a six pack of cold beer and watch football. But, he doesn’t quite make it to that la-z-boy with his six pack. When four gunmen enter a small country grocery store and take the employees hostage, Peyton and the store’s beautiful owner just barely avoid being discovered and taken hostage with the others.

Willa Sloan doesn’t know what’s happening when she emerges from the back room and gets a big, warm, Honeybun hand slapped over her mouth as she’s dragged backward into hiding. But when she learns her store has been infiltrated and her people taken hostage, the last thing she intends is to hide in a dark corner whimpering.

Together, they discover two things through that long and terrifying night. First, a country grocery store is a great place to run a stealth operation if you’re enterprising enough. And second, love can happen at the strangest times!

~~*~~
Peyton showed Brita where his hostages were and her men carted them away. Then he went to the front of  the room and slipped along the refrigeration unit, looking for Willa down all the aisles.
There was no sign of her.
Brita left to get into position near the front of the store.
A moment later, a squawk sounded through the store and Peyton jumped.
A voice vibrated over the public address system. “Mr. Honeybun.” The voice was raspy and deep, like someone who’d been sucking smoke through his throat for a few decades.
His blood pressure shot into danger zone. If the guy knew his name…
“I think you and I need to talk. There’s someone here who would greatly appreciate you coming to the office.”
Peyton peered through the refrigeration unit and swore.
Willa and Jeff stood side by side in the office, in front of the glass window, and the gunman was behind them. He held a rifle to Willa’s head.
She had her arm around Jeff’s shoulders and looked terrified.
There was only one thing to do. He couldn’t help them from the back of the store. He needed to get close enough to stop Michaels from using that gun.
Peyton opened the glass door to the nearest unit and called out. “I’m coming out now. Don’t hurt them.”
The PA system squawked again. “No guns, Honeybun. I’m watching.”
“No guns!”
Peyton figured he had about 30 seconds to do what he needed to do. He grabbed one of the water bottles he’d assembled and tucked it into the small of his back, covering it with his shirt.
Then he went out through the storeroom and entered the store. Brita was nowhere to be seen. Hopefully she was already in place at the front of the store.
Peyton took a deep breath. Time to wrangle a bad guy.
~~*~~
Available 2/9/12 here!
Posted by Sam Cheever at 5:56 AM

Sounds great, I can't wait to read the next Honeybun story!

Thanks Beth! I hope you enjoy it. Willa and Peyton were a lot of fun to write!