Nocked Senseless has a Cover! 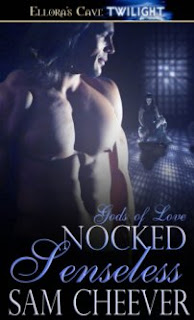 And it's gorgeous! Nocked Senseless will release on February 26th! I can't wait. You're gonna love Hermes Adonis!

Hermes Adonis has a broken heart and an attitude problem. When the Fates send him on a forced sabbatical from Cupid’s Arrow he’s not a happy Cupid. Hermes spends his days sucking Brimstone and anticipating his total destruction. But when a dark haired beauty throws him to the ground and puts a knife to his throat, he feels an unexpected spark in his dead heart.

Nidras is a cursed demon princess. She’s pretty tapped out just trying to kill the wizard who holds her curse. The last thing she needs is a man, especially one whose sexy head is fuzzy from sucking Brimstone all day. But Hermes is funny and determined, and Nidras is lonely and scared. And when they get together in a room, the heat they create nearly melts the paint from the walls.

So let the games begin. Will there be two winners? Or will they both lose, giving up their one chance at love ever after?

A wisp of flower scented air touched my skin and I turned just as a long, deadly looking knife arced through the air toward my head.

I ducked and kicked out, my instincts reverting automatically to the decades of martial arts training I’d undergone in an effort to stay in shape and manage vast levels of sexual frustration.

The figure with the knife was small, agile and quick. He dodged my first kick and came at me again with the knife. I countered the blow with an outstretched fist and spun, levering my leg outward with the force of my spin.

The figure easily jumped the kick and countered with one of his own, catching me just under the jaw as I completed my spin.

I went down hard and felt my black-clad attacker slamming into my chest as I hit the ground.

Something long and metallic settled against my throat. When I moved the knife bit into my skin, causing me to gasp and settle immediately into an unnatural stillness.

I squinted through the steam and drug haze in my mind in an effort to see the face of my assailant.

If I was gonna die I wanted to know who was killing me. And maybe even find out why.

The face above me was black and featureless. It had no hair and its skin looked shiny, impossibly smooth.

I figured it was some kind of new demon I’d never seen before. Whatever it was it smelled like sun drenched flowers.

But then the thing reached toward its head and pulled. Its skin started to separate with a soft thwucking sound. I grimaced. “Eieww!” I exclaimed.

The slick, black skin came away easily in the demon’s hand and a bright, oval face with peach tinted cheeks was looking down at me. The creature had wide lavender eyes with the longest, thickest black lashes I’d ever seen and spiky, black hair. Its lips were full and peach colored. They looked incredibly soft.

I found myself staring at those lips, licking my own in anticipation of kissing them. “You’re a girl.”

The lips parted slightly, allowing a husky laugh to escape. “And you’re a Brimstone-headed bum.”

I shrugged. What could I say? She was right.

Thanks for stopping by. I'm very excited about this one, it's a LOT of fun and Hermes is oh so sexy! And the cover captures the mood perfectly! Life is beautiful!