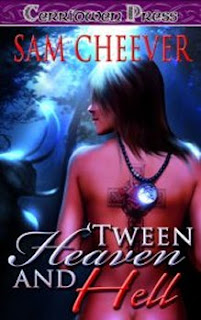 I'm very honored and excited to announce that my romantic fantasy, 'Tween Heaven and Hell, won a 2008 CAPA Award!!! Here's a little taste:

I couldn't take it anymore. I slammed the button on the hologram control and threw my pillow at the spot where the vampire holomovie had hovered just seconds before. I couldn't get away from him anywhere, not even in the privacy of my living space in the wee hours of the morning. Every time my traitorous mind found an opening, it brought him to me in my imagination. Now I was even watching holographic films about devils and vampires and their helpless female victims. This was just shit.

I got up and started to pace back and forth in my bedroom. I paced from one end of the small space to the other and back again, moving faster and faster with each revolution, like a spinning top that was building to its crescendo. My skin started to weep moisture and my heart was pounding hard in my chest, scaring the Hades out of me. But I couldn't seem to stop myself from flying around the room. No matter how fast I walked my traitorous thoughts kept finding him, outlining him lustfully, wishing for him…. "Shit, shit, shit."

I ran into the personal hygiene room, tearing my clothes off as I ran and flung myself into the shower tube. "Fifty degrees, pulsate on high."

The icy tentacles of water pounded against my skin, almost sizzling against the heat of it. I realized suddenly that this was more than simple lust and imagination. This was devil-induced mischief making. Even as I realized it a dark shape shimmered into view on the other side of my glass shower wall.

I was proud of myself that I didn't shriek. I very calmly (Okay my hands were shaking but I wasn't screaming like a banshee so give me a break!) reached over to push the off button on the shower, not trusting myself to speak to use voice de-activation.

As I emerged he raised one silky, black eyebrow and let his gaze slide down my dripping flesh. "Very lovely. I shall enjoy this very much."

My pulse exploded in my chest and, for a very brief moment, I thought I would die. But, another point for me, I simply let my gaze slide to the towel he was holding for me, just out of reach of course. "You know, I've learned a lot about the Royal Court recently, but I didn't know you were delusional as a general rule."

His yummy lips parted in a wide smile, showing just the very tips of his teeth. "Did you know that we can smell lust, little Tweener?"

He took one more look-see and then held the coveted piece of cloth out to me, taking care to hold it just far enough away that I would have to take a step closer to grab it. I looked longingly at the drying tube but quickly realized I would have to turn my back on him and leave him to his own devices for the length of time it would take the tube to dry me off. I wasn't willing to do that at the moment.

Seeing no other choice, I moved that one step closer and pulled on the towel. Without my even realizing that he'd moved, he suddenly had me smashed full length against his body, with one arm wrapped around my waist like a steel band, just at the top of my butt where it curved into my waist. "I will have just one taste now, as a preview of things to come."

I tried to jerk away but found that my legs and arms had turned to air. As his incredibly soft lips lowered to mine I felt myself floating, completely boneless in his arms. His breath smelled of lust and sensual things and the sweet heat of it moved like molten pleasure through my body as we kissed. I knew he was playing with my mind again and I wanted to cry with frustration that I was so helpless against it. Here I was, a big, bad, demon and devil conqueror and I was putty in this beautiful creature's hands. I wanted to scream. I wanted to knee him in the balls. Instead I moaned, dammit and ground myself against him. Damned traitorous flesh.