Astra Q Phelps fans...I have a release date for Book 3!! 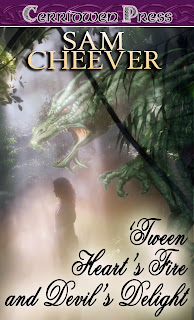 Book 3, 'Tween Heart's Fire and Devil's Delight, will be available to fans of my Dancin' With the Devil series on April 23, 2009!

Astra’s world is flipped upside down when she’s called to a demon nightclub to rescue her magic phobic sister, Darma. Turns out the event is only a precursor of the weirdness to come. A veil of twisted magic is descending over the Earth and it’s making everybody crazy. Humans are killing humans, magic users are killing other magic users, dark worlders are attacking humans at an alarming rate, and madness is rolling over everyone in waves. When the guardian angels start succumbing to a rare disease called Devil’s Plague, Astra decides a visit to the prophet is in order. But before Astra can get her arms around it all, she finds herself facing the biggest challenge she’s ever had to face…surrogate parent to a baby dragon? No way!!!

It’s a whole lot of stuff for one little Tweener to manage. But Astra Q Phelps is definitely up to the challenge!