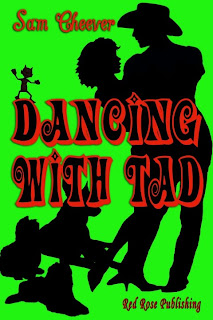 Sheriff Bone moved around behind his desk and swept a large hand toward the corner behind her. “Clancy, this is Agent Thadeous Johannsen, with the DEA.”

Clancy jumped and swung around. A tall man stood across the room, in the shadows. His broad back rested against the wall, one denim clad leg crossed over the other at his ankles. Strong arms crossed a wide chest. A cowboy hat slanted across a square jawed face, hiding eyes that Clancy knew would be dark and suspicious.

He lowered his head slightly in a nod. “I believe we’ve met, Sheriff.” His voice was deep and husky, making Clancy think of candlelight and strawberries dipped in sweet cream. Her body clenched in sudden need and her face grew warm with embarrassment.

The man pushed himself from the wall and approached her, moving like a jungle cat in a small cage. He held out a hand that was rough and warm when she clasped it. “Nice to catch your name though, Clancy.”

She opened her mouth to respond, but something had hold of her tonsils and nothing would emerge. Finally, after croaking a couple of times like a gawky adolescent, she simply nodded and whispered, “Mr. Johannsen.”

He stared at her from beneath the shadow of the hat’s wide brim and a slow smile spread across his lips. Clancy found herself staring at that smile and pressing her knees together in self-defense.

Buy Dancing With Tad
Posted by Sam Cheever at 7:38 AM