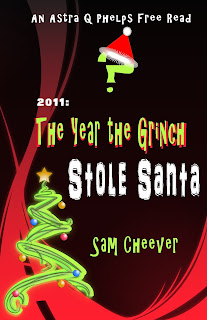 As Christmas fast approaches, and I busily work to complete this year's Christmas story, I thought it might be fun to highlight previous year's free Christmas reads. So this week's Sunday Snippet is from my 2011 Astra Q Phelps short, The Year the Grinch Stole Santa. Enjoy!

Astra is determined to take Christmas off, so she’s been ignoring the nearly constant calls from the North Pole to help them find Santa, who’s disappeared just days before Christmas.

But when a flash mob of elves show up and whisk her away to the North Pole, fresh from the shower and all nakies, what’s a Tweener to do?

Looks like Astra will be working again on Christmas after all.

Peace on Earth and Goodwill toward Men…Bleurgh!

In my world, nobody’s peaceful.

In Heaven, the Big Guy’s fighting to come to some kind of agreement with the Union of Guardian Angels and he’s worried about a major strike that will leave everybody on Earth unprotected. On Earth, violence has spiked and people are going crazy over taxes and a truly stinky economy, as well as a food shortage. And at the North Pole, there have been rumors of Elf unrest and Santa has gone missing.

It’s been all I could do to keep myself in the holiday spirit. With that goal in mind, I was currently ignoring multiple calls a day from the North Pole.

Or rather, his elves. The little buggers have been calling me every five minutes and I’ve been doing my best to avoid those calls. Why? you ask. because I’m sick and frunkin’ tired of having to work every Christmas.

I saw that face.

You don’t think I can bake cookies do you? Huh?

Sigh. If I get the chance.

My televisual bleeped again and I grabbed the pillow next to me and covered my face with it. Cursing like a green Martian policeman, I climbed out of bed and headed for the personal hygiene room, intending to drown my sorrows in blissfully hot soapy water.

A few minutes later, I was soaking wet and happily soapy when the lights in the room flickered and I sensed movement. I squinted one eye open, cognizant of the soap running down my face, and started to pull my power forward.

Something light and shimmery landed on my head and my power froze on my fingertips. My eyes opened wide and I immediately regretted it as soap ran into them in a stinging stream.

“Frunk!” I lifted a hand and scraped it over my face and then glared down at my diminutive attackers, my eyes trying their best to close under the sting.

A familiar face glared back at me.

He was dressed in green tights and a green tunic and wearing a red pointed hat, a wide red belt, and red shoes with curling toes.

As usual, he looked ridiculous.

Behind him ranged several more vertically challenged rodents wearing stupid outfits to match Ralphy’s. They all had ridiculously rosy cheeks too, but their expressions were less jolly.

Ralphy looked down his pug nose at me. It didn’t take him long since it was only about an inch long. “Astra Q Phelps. I came to tell you that, this year, you’re so naughty you don’t even rate coal. This year all you’re gonna get from the North Pole is hostility.”

Want more? You can download the entire story free!