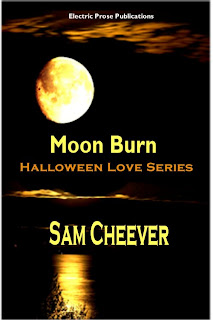 Every year a write a new installment for my sexy Halloween Love novella series. I'm currently working on Book 4, Deep, Dark, Desire, expected publication date September 15th. Moon Burn is Book 2 in the series. I hope you enjoy this snippet!

About the series: My Halloween Love series follows the Lupire, a race of elite protectors with both werewolf and vampire in their bloodlines, and the beautiful black females of the Lupa Guardian pack. These two elite groups share a common goal...to protect the magical and human worlds from evil. What they don't realize...yet...is that their destinies are also intertwined under mating magic...the most powerful force any of them will ever encounter.

Before Bren knew what was happening his lips were touching hers. It was the gentlest of touches, barely there, but the effect was searing. Her nipples hardened and her thighs tightened on a wave of pure lust.

Time stopped. The sounds of the party beyond her office door faded to the background and were forgotten. Bren’s body surged into near painful awareness of the man sitting next to her. Her skin tingled with it, as if doused in magic drenched air.

His fingers touched her cheek and slipped, featherlike, toward her temple, where they slid into her hair and got caught, pulling strands from the braid she used to keep the soft curls at bay.

His breath was fire against her lips. The places where his skin touched hers burned. His scent, oh gods his scent… Bren felt faint. He pressed the kiss more firmly for just a second and then broke it, leaning slightly away. “Your skin’s on fire.”

Bren gulped, unable to tear her gaze away from his face. “Yes.”

“Are you all right?”

Her response was to lean close and recapture his lips in a searing, knee melting kiss.

Micca reached up and tried to slide his fingers through her incredibly soft hair. They caught again on the braided strands. He found the elastic band at the ends and yanked it off, allowing the fragrant silk to slide heavily over his hand. He wrapped an arm around her waist and stood, pulling her up tight against his body, so that he could feel every softly padded curve on her long body.

God she was sexy. He’d been lusting after the tall, sexy black woman for weeks, and he’d been sure she felt the same way about him. Unfortunately, she’d worked too hard to avoid him and Micca had noticed. He’d never been one to push himself on a woman.

Even a woman whose aura screamed for him.

He almost came on the spot when she wrapped her long legs around his hips and arched her pubis into him, grinding against the hard ridge beneath his jeans. His tongue slipped inside her sweet mouth, tangling hungrily with hers.

He groaned as she captured his tongue between her teeth and nibbled, slipping an overheated palm up the inside of his shirt and gliding it over his skin to tweak a nipple.

The difference in their temperatures was stark. Micca had always run cool, where Bren cast heat away from her body like the sun emitted its rays. It was just one more thing to draw him in.

He reveled in her heat.