This week's snippet is from my comedic paranormal short, Purple Prose. It's actually a little longer than a snippet, I hope you don't mind. This is one of my favorite scenes! Zahn is providing "inspiration" to Lindsey for a sex scene. #:0) 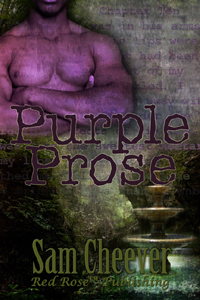 
Fallen Angels gives Purple Prose 5 Angels! "I grinned my way through Purple Prose - it truly is a laugh-a-minute read. Hilarious situations, witty dialogue, a parrot that adds his own commentary, and two very likeable lead characters make this a book to remember."

He reached down and covered one of my hands with his own and a strange warmth spread through me, starting from my hand and moving to strategic points throughout my body. I gasped as the warmth found my most special place and ignited it. Zahn lowered his head so that his lips were close to my ear. Very close. Close enough for his tongue to sweep out and slide around the rim and then pull the lobe into his hot mouth…
I shivered.
“Write,” he whispered huskily into my ear.
And I did. My fingers flew over the keyboard, creating heat between my characters that infused me right along with them. As Frank pulled Carol into his hard embrace, I felt Zahn pressing into my back, all male hardness, heat, and sexual musk. As Frank’s lips found Carol’s, Zahn’s soft, sensual mouth trailed up the back of my neck and over to the sensitive spot just behind my ear.
I gasped and my head dropped forward but somehow my fingers never left the keyboard. Frank and Carol’s heated moment never left my mind. My fingers flew, heat built between Frank and Carol, fire built between me and my uber-sexy muse.
Frank slid the straps of Carol’s gauzy camisole off her shoulders, following the silky stroke of fabric with his lips. Zahn’s hands slid slowly up my arms and his nimble fingers found the tiny buttons on the front of my blouse. He released them, one by one, deliberately, until the blouse fell open, exposing the lacy bra I was wearing underneath.
My fingers continued to fly on the keyboard, making Frank nibble his way up Carol’s throat. I groaned as Zahn leaned over me and forged a moist, heated trail across my back and shoulders. Carol dropped her head back and cried out as Frank’s hot mouth closed over a silk covered nipple, I bit my lip as Zahn’s big, warm hands pulled first one breast, and then the other free of the suddenly confining lace.
Carol grabbed Frank’s head and held him to her painfully sensitive nipple, her body vibrating with building need. I lay my head against Zahn’s shoulder and shivered as he caressed my stomach and breasts in warm, silken strokes that brought my legs apart under my keyboard and made me lift out of the chair under the growing burn of need.
My bra disappeared along with Carol’s. My nipples hardened and pulsed for Zahn’s hot mouth, just as Carol moaned under Frank’s tender ministrations. I whimpered with need and Zahn responded, turning me in my chair so that his hot mouth could encompass first one and then the other rigid peak.
I left Carol and Frank to their own devices and immersed myself in Zahn. His touch, his scent, the feel of his smooth, hard flesh against mine.
Zahn reached down and lifted me out of my chair, carrying me toward the bedroom. As we walked his lips devoured mine, pulling my breath from my lungs and heating it, creating our own special cocktail of air that intoxicated us with its power and sweetness.

LOL, of course! Thanks for stopping by!