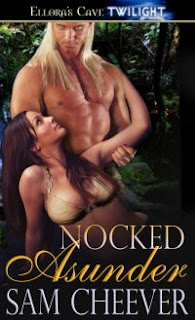 Book two of my Gods of Love series is available through Ellora's Cave now!

In her line of work Athena Googlios is accustomed to hot, sexy men. But Damian Leandar puts hot on a whole new level. His touch, even his gaze makes her body clench and warm with lust. Athena’s mind tells her she needs to treat him like any other client. But her body has its own agenda. And when Athena finds herself facing off with a pair of truly ugly mythical creatures, Damian may be the only one who can save her from a fate worse than death. Unfortunately, Damian has some pretty big secrets. And despite the feelings they can no longer ignore, something bigger than love may yet come between them. In the end, it might take losing everything they have, to make them realize how much they had to lose.

He took a step closer, leaned down until his lips were a hair’s breadth from mine, and said, “I find myself somehow…drawn…to you.”

I jerked my gaze back toward the fire, fighting with everything I had not to give in to an urge to pull him into my arms and consume him with my lips and body. But I knew that wasn’t right. It couldn’t be right. I barely knew the man.

He didn’t move away. His breath against my face was a warm, sweet promise. I stopped breathing, trapped within my body’s raging need like a deer in oncoming headlights. I closed my eyes and prayed my stillness would help me resist. But it didn’t help. My body nearly vibrated with need.

He touched my cheek with his lips, “Athena.”

I whimpered slightly and turned, closing the distance between us, my lips melting hungrily over his.

As soon as our lips touched it was as if a spark had ignited and something exploded through me. The flash fire was more than heat, it was light and sound and incredible sensation.

His arms snaked around my waist, pulling me indecently tight against his body. His teeth drew my bottom lip in, nibbling softly before his tongue swept over the tingling aftermath and slid into my mouth to tangle with mine.

I slipped my hands under his t-shirt and up his smooth back. His skin warmed and tightened under my hands and the scent of him wafted over me, infusing itself into my senses like a drug.

The kiss deepened and held, pulling us both inexorably into our own place, our private niche, apart from the real world playing itself out on those streets around us.

I thought I’d stopped breathing. But discovered I was sharing his breath.
Between my thighs, a clenching wetness told me I wanted the man in my arms more than I’d wanted anyone in a long, long, very long time.

A warm, salty tear slid between our lips and Damian pulled away. “You’re crying.” He looked so alarmed I laughed.

He stared at me for a beat longer and then lowered his head again.

I closed my eyes in anticipation of another kiss. Instead I felt his hot tongue, sliding across my cheek where the tears had been.

His hands fell away. The air around me grew cool again.

I gasped and opened my eyes.

He was gone. Leaving only a thought in my mind, which I was pretty sure had to be a figment of my imagination.

Sam
Magic, Adventure, Love on the Run
www.samcheever.com
"Ms. Cheever writes with class, humor and lots of fun
while weaving an excellent story." The Romance Studio
Posted by Sam Cheever at 1:11 PM

Anonymous said...
This comment has been removed by a blog administrator.
November 9, 2009 at 3:51 PM