Who are the Honeybun Hunks? 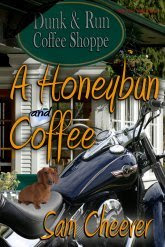 There are eight of them. They have names that should have died along with the old English Lords who inspired them. Each one weirder than the last...Alastair, Percival, Clovis, Alfric, Warwicke, Edric, Heathcliffe, and Godric. The boys believe the naming thing was their mother's revenge on their father with the birth of each successive son.

Their names may be goofy but these guys are far from it. They're smart, strong, deliciously good looking, and talented in so many ways. The Honeybuns have a wide range of skills and include a heart surgeon, a lawyer, a world famous race car driver, a writer, a celebrated dancer, a Marine drill sergeant, a financial planner, and a spy. But their most important trait?

When their women need them...there's no stopping them.

Alastair's story, A Honeybun and Coffee, will hit cyber shelves on December 18th. Check it out:

Surprised into hiding in a men’s room stall at work, Angie Peterson, owner of the Dunk and Run Coffee Shoppe, overhears two men talking about killing someone named Alastair Honeybun. Picturing a frail, helpless old Englishman, Angie rushes to warn him. There’s only one, small problem, Alastair Honeybun is six foot two inches of yummy man, who’s perfectly capable of taking care of himself. But when the thugs show up while Angie’s still there, they soon figure out they’ll need to take care of each other.

Running from criminals who seem to know where they are and what they’re doing before they do, the two enlist Alastair’s hunky and talented brothers to help them unravel the confusing swirl of murder, kidnapping, and downright unpleasantness closing in on them. But not to worry, the Honeybun brothers are determined to put a serious crimp in the bad guys’ day!

He grabbed the little dog from her and shoved him into a pouch on the front of the bike and then handed her a helmet. She was still shaking her head when he slammed his helmet onto his head and climbed onto the motorcycle. He turned to look at her. “When I start this they’ll know we’re back here and we’ll need to move fast. I need you to climb on now.”

Angie had just about chewed the fingernail down to her first knuckle but she realized he was right and, taking a deep breath, she slammed the helmet onto her head and climbed up behind him. “I’m terrified of these things and I’m not wearing any leather so if you wouldn’t mind I’d appreciate it if you didn’t slide us across the pavement or anything.”

Alastair’s response was to turn the key, rev the engine, and yell, “hold on!” over his shoulder before they jerked into what felt like about a hundred miles an hour.

“Shitttttttt!!!!!!” Angie screamed as they took the first turn into an extremely narrow alley without slowing in any noticeable way. The tire under her butt slid sideways until she thought for sure she was going to be pavement bling but then it finally worked itself out and they were flying straight down the alley.

They whizzed past an overflowing dumpster and Angie saw a couple of sets of beady eyes glowing at her from the middle of the dumpster’s aromatic contents and suddenly wished she were a rat in a dumpster instead of a dope on the back of a death trap. Then a fat, orange cat jumped out of the shadows in front of them and Alastair slammed on the brake to avoid hitting it. The bike went into a skid and they started folding toward the ground. Angie thought her eyes would pop from terror as they headed toward a brick wall fast and sideways, but then Alastair threw down a foot and somehow got them upright again.

As soon as they were almost vertical, he revved the engine and they took the rest of the alley at full speed again. Emerging finally from the dark, obstacle strewn passage, Alastair pointed the bike toward the park. He left the street without slowing and as they hit the curb they were airborne for at least two minutes and then landed hard on the sidewalk. Alastair threw out a hand to hold the dog in its little sack and then gunned it again when both tires were on the sidewalk. They crossed the park on the sidewalk with Alastair screaming at people to get out of their way.

When they emerged on the West side of the park Alastair immediately took a sharp left and re-entered it using the road that wove past the war memorial. They followed the beautiful, winding road past pristine white buildings and whipped back out onto the street on the North side of the park. Then he headed into quiet, pristine suburbia and wove through several streets until Angie was totally lost.

Finally he pulled the bike into another alley and drove through at a more sedate pace. When they stopped at the other end Angie was looking at the front of his house. The thugs’ car was gone. Apparently they’d either given up or were giving chase.

He gunned the engine again and they were off, shooting across the street at an impossible speed. He jerked the bike to a stop in front of the garage and reached into a pocket of the dog sack. One of the garage doors started opening.

Alastair pulled into the garage, parked the bike, and immediately hit the garage door button to close the door. Angie sat there, feeling like her mind was mired in cement. Her entire body was vibrating. Alastair pried her arms from around his waist and climbed off. Angie followed slowly, and when she stood up, her knees buckled. Alastair caught her before her butt hit the clean cement of the over-tidy garage.

Alastair watched her carefully, like you’d watch a crazy person in a room full of knives. “Are you gonna be okay or should I bitch slap you?”

Angie glared at him and took a tentative step to see if her legs would hold her. “Do you think it was a good idea to come back here?”

He shook his head. “No. We can’t stay. I just wanted to grab a few things for me and Jaws before we hit the road again.”

Angie held up a hand. “Don’t…use that expression in my presence ever again. And if there isn’t a car involved in the next leg of the journey you can count me out. I’d rather be killed by the thugs, at least it would be fast, and comparatively terror free.”

He grinned at her.