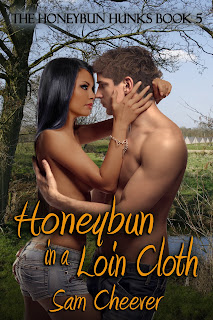 Honeybun in a Loin Cloth
Fun and Sexy Romantic Suspense by Sam Cheever
Available Now!
When Godric Honeybun decides to portray a Native American in a war reenactment weekend, he doesn’t expect to run into his own, personal Indian princess on the battle field. Much to his amazement, when someone tries to kill her, he quickly discovers his inner warrior as he fights to keep her safe.
Chandini Moonglow likes reenactment weekends because they allow her to get in touch with her Native American roots. A brilliant chemist and holistic healer, Dini can’t imagine who might want her dead. But she does know that the tall, sexy man with curly, auburn hair and an impossibly deep voice might be all that stands between her and certain death. And, for a variety of reasons, she’s really glad he’s there!
~~*~~
Godric Honeybun stretched his long legs and yawned, the damp morning air filling his lungs with clean oxygen that gave him energy he shouldn’t have had at five in the morning.
His sneaker hit a small pebble and it skipped away, bouncing over the rocky edge of the bank toward the water below.
It hit the deep water of the wide creek with a soft plop that lifted the head of the beautiful creature on the opposite side of the creek. The deer’s dark eyes sparked once in the light of the full moon before it turned and bounded soundlessly away.
Godric smiled as the spotted fawn took one last look in his direction, flipped its tiny tail, and then followed after its mother.
Cheeky little bastard.
He could smell coffee somewhere in the distance, coming from the encampment. Somebody else was an early riser.Or maybe, like him, they found it hard to sleep on concrete-like ground embedded with small, sharp rocks. He thought about heading back to look for the owner of the coffee so he could beg, borrow, or steal some of it. But then something moved on the bank of the creek below, drawing his gaze.
A woman was standing beside the creek. She was lean, probably five foot eight, with narrow hips, long, slimly muscular arms and legs, and large breasts that peaked from the cold, against the caftan-like outfit she was wearing.
Her skin looked milky brown in the skimpy early morning light, and smooth as cream.
Her waist length hair was thick and straight, the strands flashing blue-black from the light of the moon overhead.
Her feet were bare and she carried what looked like a white towel draped over her hands. She stared at the sparkling water of the creek for a long moment, looking as if she were working up the courage to enter it.


Godric had waded in it the day before and knew just exactly how cold it would be.
Despite, knowing full well that he should leave, he couldn’t look away. He felt like a voyeur watching her. But something about the woman called to him.
Something that felt like magic.
As if she felt the heat of his gaze, her head turned and she focused her gaze in his direction. Her features were partially obscured by darkness. But the moon highlighted high, sharp cheekbones and a long, slightly rounded nose. Her lips looked the color of a fine Cabernet in the skimpy light, and her eyes, deep-set and wide, looked unfathomable and black.
He stared back, feeling as if she could see him sitting there, despite the tree cover and dense undergrowth surrounding the spot where he sat.
Did she smile?
Was that a nod?
Slowly, careful like the deer he’d been watching across the creek, she reached up to pull the caftan off her shoulders.
The cream colored fabric slid off wide shoulders and down, baring the rounded tops of her beautiful breasts.


Godric gasped, feeling a tightening in his groin as the fabric caught on a pair of burgundy colored nipples and then dropped downward, pooling below her tiny waist, on her slim hips.
His need to watch the show she was providing warred with Godric’s upbringing and his thigh muscles tightened as he started to stand.
To walk away.
A soft cloud of creamy material hit the rocky ground at her feet and Godric stilled, groaning.
She was magnificent. Regal, yet somehow wild and untamed. She looked like an Indian Princess, pulled right out of the pages of history and dropped in the woods to taunt and tempt him.
Time and distance slipped away as Godric stood. His gaze never wavered from the dark and unreadable stare of the woman standing thirty feet away on the bank of the wide creek.
Her dark eyes followed him as he stood.
The towel suddenly joined the creamy fabric on the ground and she turned, walking on unhurried, silent feet into the icy water.
Godric forced himself to turn away, and started back toward camp, intending to leave her to bathe in privacy.

Super congrats on the new release Sam!!! Love me some Honeybuns!