Here are Sam Cheever's answers to the questions:

B. If you could come back in your next life as an animal, what would it be? One of my dogs!

C. Do you believe in space aliens? Of course! I think I know a few!

E. Do you prefer fruit or chocolate? (yeah right!)Chocolate all the way!!!

F. Are you a mini van or a Mazerati? Definitely a mini-van

G. Would you pick Evanovich or Tolstoy? Like Tolstoy...LOVE Evanovich

H. Are you Brandy or Ripple? Ripple served its purpose in High School (don't tell my mother!) Brandy feels more adult doesn't it? (tastes like horse pee though!)

I. Do you feel safer in blizzards or hurricanes? Blizzards...beautiful storms!

J. What is your worst fear? Getting all the way to 100 years old and still having that last 10 pounds to lose...horrifying!

To find out more about Sam and her work, please pay her a visit at any one of the following online hot spots: her website; her author page on Facebook; her MySpace page; or her blog. She always loves to chat with readers. 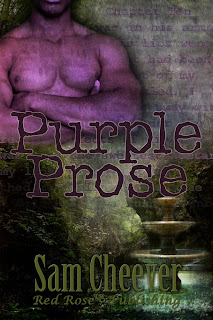 When she hits the writer's block of all writer's blocks, Lindsey Prince thinks her muse has abandoned her. But she opens her door one day to find a gorgeous new one standing there, "anxious" to help her finish her current project. There's only one problem…her new muse, Zahn, has been turned purple by Calliope, Chief of the Muses, for indulging in Purple Prose. Unfortunately, his fate rests on Lindsey submitting a purple prose free manuscript to her editor. No pressure there.

To make matters worse, Zahn apparently has a powerful and cranky ex-girlfriend who isn't all that thrilled by the growing attraction between Lindsey and Zahn. She'll do anything to stop Lindsey from submitting that manuscript. Anything. Based on the extremely heated "research" she and Zahn have been indulging in, Lindsey knows her sexy IR story will sizzle. She only needs to live through the process of writing it.

No easy task, that.

You know your day isn't going to go well when you open the door to find a woman dressed as an ancient Greek goddess on your doorstep.

My eyes widened and I stuck my head out the door, scouring the neighborhood for witnesses. There was no doubt about it. I was going to be the talk of the community. First a gorgeous purple muse, and now this. I grabbed the young woman's arm and pulled her inside, slamming the door behind her.

For a long moment I stared at her, my hands on my hips. She was impossibly beautiful, with long, reddish blond hair, a Barbie doll figure, and full, perfectly shaped lips. Her eyes were large and blue in a porcelain-skinned face.

I hated her immediately.

“I assume you came to see Zahn?”

She gave me a small, polite bow. “I am Astis, daughter of Calliope.”

“Chief of the Muses.” Zahn‟s deep voice startled me.

I turned and watched him stride toward us. I hadn't known he was awake.

He didn't look happy to see our visitor.

He stopped before the pretty goddess and bowed deeply. “Astis. To what do we owe this honor?”

Astis dipped the longest, thickest eyelashes I'd ever seen in a demure maneuver that didn't seem to go with the regal stance. “Zahn. I come to see how you fare.”

He stared hard at her, his feelings hidden behind the handsome mask of his face. I glanced at Astis and saw the same blank slate there. Oh, oh! I thought. This was trouble.

Right on cue Mike shot into the room as if flames were licking at this tail feathers. “Awwkkk! Beware the Ex! Hide the china! Awwkkk!”
Mike fluttered to Zahn's shoulder and twitched there, looking more nervous than I'd ever seen him.

Astis lifted her gem-like blue gaze toward the bird and her face briefly showed anger. So briefly in fact that I would have missed it had I not been staring directly at her, watching for a response. Then she smiled at Zahn. “I see you still have that moth-eaten bird.”

Zahn reached up and handed Mike a nibble of something. Mike took the offering but simply held it in his beak, apparently too nervous to eat. “Mike will always be with me. He’s very loyal.”

My gaze flashed to Zahn. His dark, purple face was still unreadable, but his tone had been fraught with meaning. My initial feeling of foreboding strengthened. Whoever this chick was, she apparently was not good news for anyone in this room.

A taut moment followed, wherein I considered chewing off most of my fingers. I finally decided action was better than maiming myself.

“Would you like to come in? Have a seat? Can I get you something?”

Astis dragged her emotionless gaze from Zahn and Mike and smiled at me. Suddenly I wondered what all the drama was about. She seemed harmless enough. “I'd like that, thank you.” Striding toward the door into my backyard, she motioned for Zahn to follow. “I'll take a cup of tea, please. As hot as you can make it. With lemon and just a touch of honey. And if you have cake, I'd like that too. Chocolate, if you don't mind, with cinnamon sprinkled across the top -- just a small slice. And I'd like some water too -- spring water -- with a slice of lime in it, and if you have a chilled glass that would be very nice. We'll be by the fountain.”

I watched her exit the house into the back yard and slowly turned to Zahn. “Are you kidding me?”

He shrugged. “Sorry. I'll take care of it.” He strode after her with Mike clinging tenaciously to his shoulder. Mike was so agitated that his feathers were all ruffly. He looked like he'd flown under one of those industrial sized dryer things in a car wash.

It wasn't until the door closed behind them that I realized what she'd said.

“Fountain? How the hell did she know there was a fountain?” Unfortunately I didn't get a response because there was nobody in the room but me. So I swore to myself and headed into the kitchen to try to scrounge up something resembling the massive order she'd given me.

“Spring water my ass.” I murmured angrily. It occurred to me that the water in the toilet probably started from a spring somewhere. My spirits rose considerably with the thought.